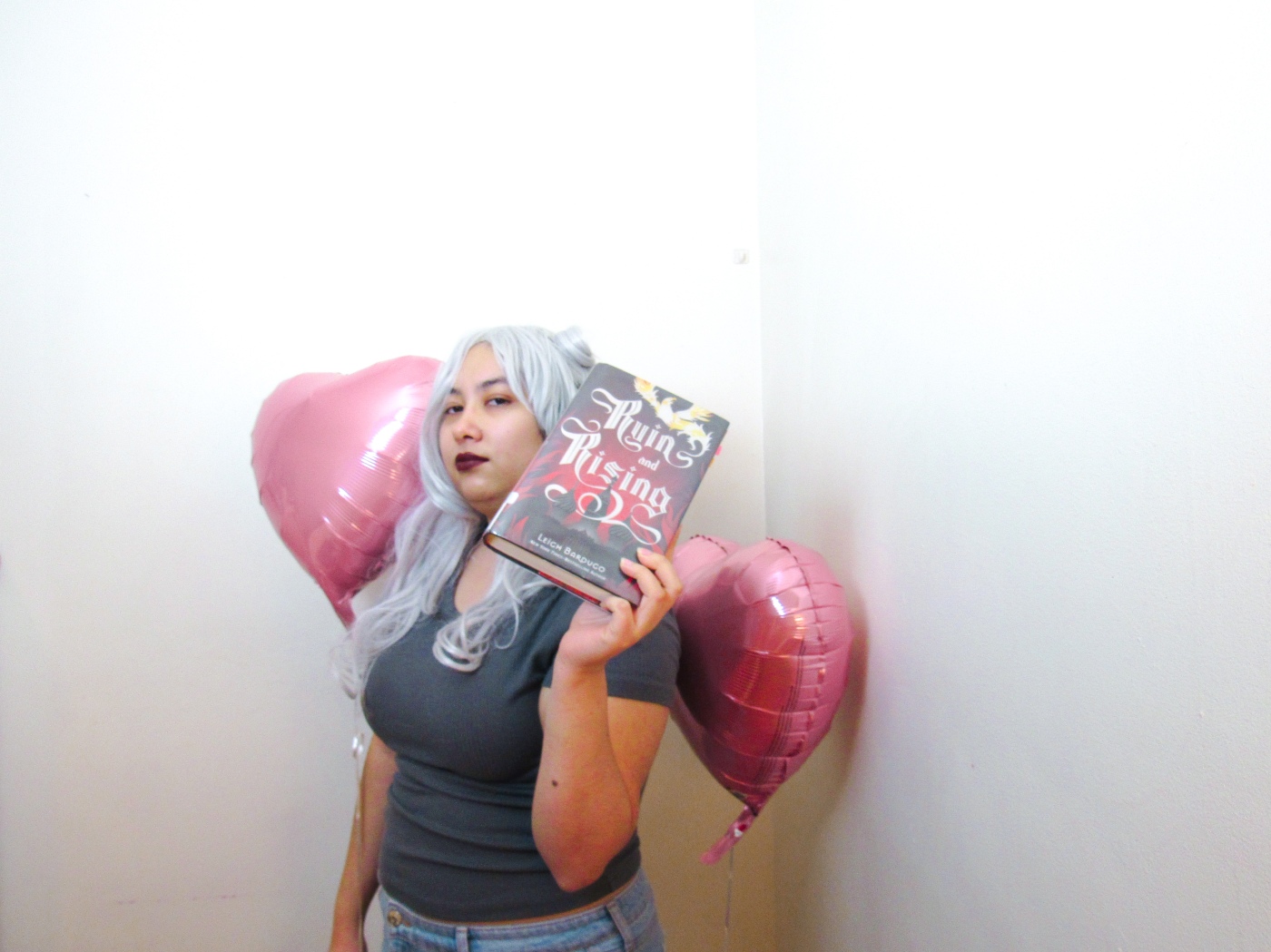 Hello book lovers! Have you looked at the new Shadow and Bone pictures Netflix released? Did you see the photo of Alina and the Darkling together? This man is toxic but I’m still excited to see that part of the story. Speaking of Shadow and Bone, I’ve collected my thoughts for this last novel and gathered them together in this post for your enjoyment.

If you have been following this series from the beginning then you know I’ve been spoiling all the books over on my youtube channel. And today is no different, so if would like to know all the juicy plot points for this series head on over to my youtube Living in Libros.

If you want to live a spoiler free life read the summary and dip. My thoughts are full of spoilers and a rant for the whole series. Proceed with caution.

The Darkling’s in control of Ravka and Alina is trapped in the dusty White Catedral without the use of her power. But that won’t stop Alina or her friends from attempting to escape. Alina’s accepted her destiny: hunt the firebird, unite the amplifiers, save Ravka, and not go mad with power.

Alina’s overwhelmed and turns to the only person who could understand what it’s like to wield so much power, her enemy the Darkling. And the Darkling’s not done attempting to make Alina his queen.

However, as Alina grows closer to hunting the firebird she must also accept that she might not stomach the sacrifice required to awaken the third amplifier.

Okay, I’m gonna start with the things I liked. I enjoyed that Alina’s bond with her friends became even more close knit. And it’s those same friends who break her out of White Cathedral. I enjoyed watching them bond throughout their hunt for Nikolai and the firebird.

When this series began, Alina could only confine in Mal and Genya but she finished this series with even more friends and she finally had some women, Grisha women at that, to confine in! I was so happy for her.

Additionally, Ruin and Rising introduces a new character that stole my heart *clears throat* Harshaw. Harshaw is a Grisha with the ability to summon flames and he has a cute cat sidekick he calls Oncat, which just means cat in English. This pyrotechnic dork had so many great one-liners in this novel I wished he had been able to stick around longer.

Now before I go further in this review I want to mention that this novel has characters dealing with PTSD, consequences of war, loss of a limb, rape, and character death. If any of those things upset you, proceed with caution when reading this series.

Okay, I think all readers of this series are wondering but what did you think about the ending?

The ending I think made narrative sense. Alina and Mal ending up together as nobodies is how they began this series. Every Epilogue for every novel showed Alina and Mal together hiding from the Darkling or assuming the identities of nobodies. It made sense.

I also liked that this book finally made me see how toxic the Darkling is. I understood his role as the antagonist in previous novels but when Alina finally turns her back on him so did I.

This book also succeeds in making me love Mal. Mal’s journey to hunt the firebird was incredible to see and the fact that it is him who is the third amplifier was so unexpected and heartbreaking for Alina. I was both shocked and in love with the concept. On one hand, I didn’t want Alina to suffer even more but on the other, Mal finally had a greater purpose in this story than being Alina’s love interest. Oh and the fact that Mal is related to the Darkling was unexpected.

That being said…What. Was .THAT. ENDING?

As I said the ending made sense but was it a satisfying conclusion for me? Hell no. We began this book series with Alina learning to love this part of herself that she’s kept tucked away and ignored. We see her throughout the series learning to love that part of herself. Sure, Alina also becomes more increasingly concerned that she’ll turn into the Darkling one day but let’s be honest, Alina has too much heart. She showed Mercy to the Stag, she hesitated to kill the Sea Whip, and she straight up refuses to kill the 3rd amplifier even if it’ll save Ravka.

I think the only reason this ending occurred was because both Alina and the Darkling wield so much power and the Darkling becoming drunk on that power became a liability for Ravka, so the only solution was for both the Darkling and the Sun Summoner to cease from existence. Their powers are meant to balance each other but neither Alina nor the Darkling could agree on a mission statement so it was only fitting that both of their powers came to end.

It makes sense. But I wasn’t here for it. What bothers me the most is Alina losing her powers and that her Sun Summoner powers spread to those who are not Grisha. I might not have paid that close attention while reading the Six of Crows duology but where is this plot point in those novels?

Also, I felt like a lot of the Darkling’s story was missing. We learn Baghra’s origin story and the truth behind Morozova and his amplifiers but never about the Darkling. He’s motivated by the desire to put power in the hands of the Grisha because of so many people shunning him and his mother’s powers.  Sure that’s part of his arc but where’s the rest? Why did he become so violent in pursuit of his goals?

The Darkling is also obsessed with Alina because he wants to use her power to achieve his goals but what about the scene in this novel when he tells her that she’s meant to be his balance?

Speaking of balance both of them had none. The Darkling has no redeeming qualities and Alina never explores her darkness. Sure after Siege and Storm they both end up with a piece of each other’s power but that’s about it. Additionally, we never learn what power the Darkling got. In terms of personalities and morals, they’re completely different. And the series emphasizes that Alina isn’t as strong as the Darkling.

I don’t understand why she’s not, the Darkling needs no amplifiers but Alina does? That is not a balance.

When I first read Shadow and Bone I had hoped the Darkling would have a redemption arc, that he’d see the error to his ways. But we never see him regret his actions. Alina sees the briefest sliver in his eye when she confronts him for blinding his mother but that’s the extent of his regret.

That being said, would this story have been better if the Darkling had a redemption arc? In my opinion, yes. I still think Alina and Mal should have ended up together, but I felt like there should have been something more for the Darkling and Alina. This series rejects the balance they could have had together and it makes it so Alina’s sole existence was to end the Darkling.

This certainly makes the Darkling an easy villain but not a complex one. Sure he flirts with Alina and she flirts back but did he ever have feelings for her?

When Alina takes the third amplifier and breaks her bond with the previous amplifiers, Darkling’s horrified, and his first words aren’t about the end of his plans but his heartbreak “you were meant to be like me.” Bardugo 382.

This could be interpreted as the Darkling yearning for Alina to follow his path of evil and toxicity. But he was the one who told Alina she was meant to be his balance so I think he didn’t much care whether she shared his views, but rather that she existed to be as powerful as him.

As the series is written now the Darkling and Alina’s relationship mirrors a toxic relationship. Alina knows the Darkling’s no good for her and yet she seeks him out when she’s lonely and confused. That’s what’s so frustrating. I feel as if there was more to their relationship and their powers. I wish we got to explore it more, but in the end, their story and their power fade from existence.

One last note I want to make is that Alina acknowledges that the Darkling’s a monster in Siege and Storm, but he’s her monster. And in this novel she laments that the Darkling transformed her prince, Nikolai, into a monster. I don’t know what the significance of these two instances mean but I do think it’s significant that she never calls Mal a monster. Nikolai and the Darkling both want to use Alina whether for power or political gain so I think it’s interesting she calls them both monsters in the series.

What did you think of the Shadow and Bone series? Are you gonna pick up these novels are you ready for the Netflix adaption?

Which speaking of have you seen the trailer?!

My last question for all the book lovers out there is if you could be best friends with anyone in this series who would it be? I’d be besties with Zoya and we’d go on adventures together and break hearts.

until next time I’ll be living in libros,

Check out my other posts!