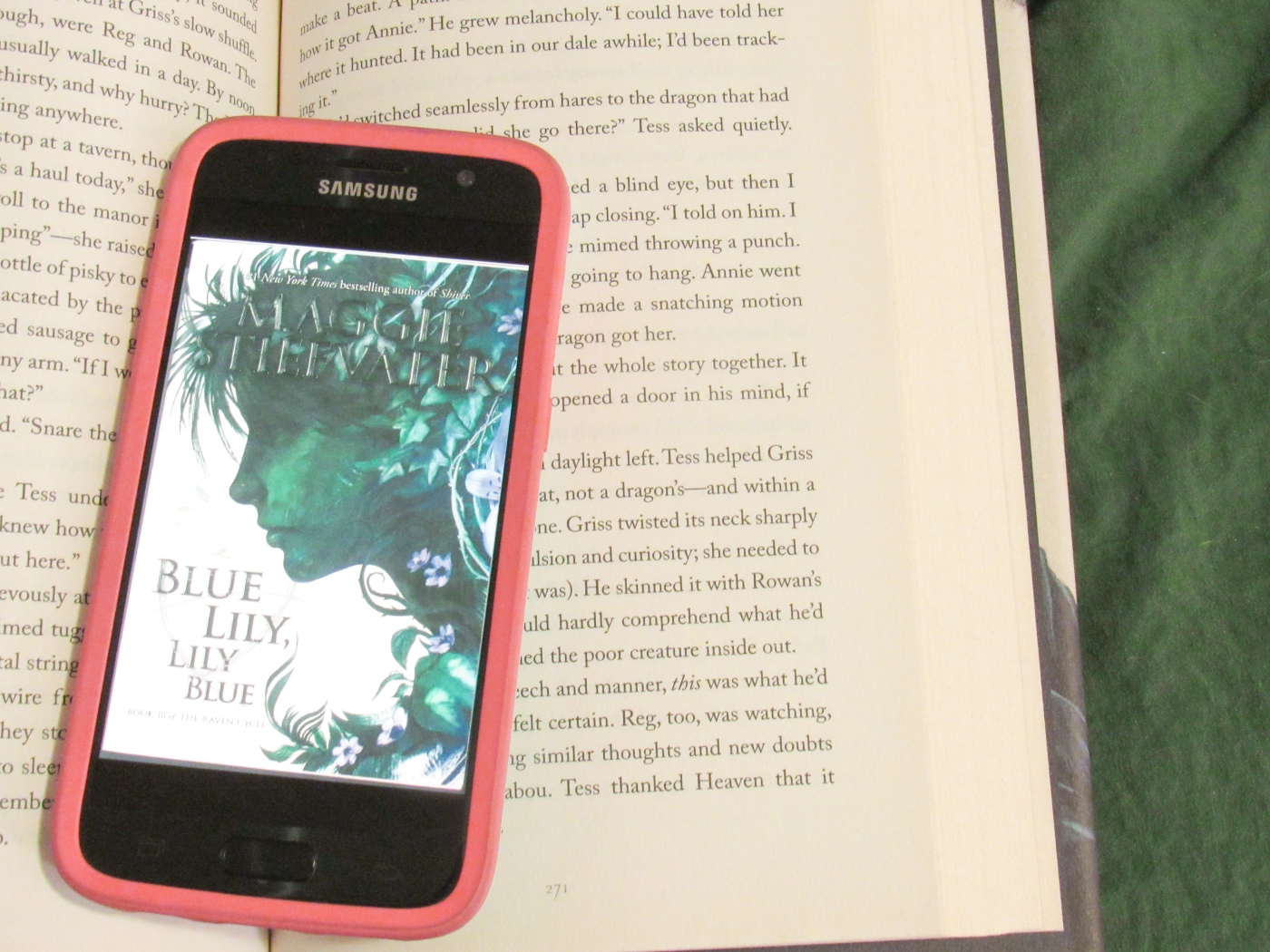 Hello readers! I am back again with another review of the Raven cycle. This week I jumped into the third installment known as Blue Lily, Lily Blue.  Check out my other reviews of the Raven Cycles series here.

Previously on the Raven Cycles series, Adam learned to control his gift from Cabeswater, Ronan discovered his mother was a dream creation and rewrote his father’s will, Gansey and Blue began taking late-night evening drives but ultimately decided not to date each other because they didn’t want to hurt Adam. Muara Sargent begins dating Mr. Gray, a former assassin, and accidentally gets herself trapped in a cave.

*This post contains affiliate links, If you decide to complete a purchase through one of my links I earn a commission.

Blue and the Raven Boys are all starting the Senior year of high school. Most of the boys know what comes next, but because of Blue’s financial strain, she’s unsure about the possibility of college. Coupled with the disappearance of her mother, Blue is stressed out. Luckily, the Raven Boys’ search for the sleeping king continues, and the new adventures and her nightly car drives with Gansey help Blue destress. However, since Mr. Gray quit his job, his employer decides to come to Henriette and seek revenge on Mr. Gray while also tormenting Blue and the boys.

But as the Raven teens get closer to waking Glenndower they discover a cursed cave hidden in the Virginia mountains. The cave is ominous, and given the teens have strict orders not to awaken the third sleeper, they must proceed with caution.

In my previous review, I mentioned that I thought it was weird that Muara fell in love with an assassin, and I had some mixed feelings about the whole thing. I still have mixed feelings about it, but I’ve come to accept that Miss Muara Sargent is *Meg thee Stallion voice* a big ol’ freak with an even bigger heart. Therefore, I’m okay with their relationship, and Mr. Gray is always coming through to help the boys.

Okay, I thought for sure this book would push the Adam and Ronan romance to new heights with some flirting, realizations, and feelings! But none of that! Not even a longing glance! I’m not saying I’m giving up on the ship because the subtext has been there from the beginning, but I think that this romance might come to fruition in the last novel.

Honestly, I’m not sure, but I thought I would mention this here now. I always thought that Ronan had a crush on Gansey in the first novel. Ronan was always protective of him and the people he let in his life. Not to mention Gansey knew Ronan before his father’s death and they’ve only know closer. If you read this series let me know what you think.

Plot-wise, I loved that people are finally realizing that Gansey will die in the coming year. Blue shouldn’t have had to carry that weight alone, especially now that she is beginning to fall in love with him! I can’t wait for the angst to ensue when or if Blue decides to tell Gansey she’s known the entire time. I wonder if Blue would date a ghost? Her first kiss was with Noah, after all.

This novel also introduced a new strange character, that I didn’t know I needed in my life in the form of Glendower’s daughter, Gwenllian. Gwenllian is very similar to Sarah Sanderson of Hocus Pocus.  She has the same aloof, mischievous energy, sings at random, and dresses as she pleases. I can’t wait to see what else she’ll get up to in Raven King!

And finally, another wild ending as per all the novels in the raven cycles. Spoilers in the next sentence. AAAAAAAA. I thought it was strange that Maura and the other psychics shrugged off Neve’s disappearance in the first novel. I suspected they preferred her gone, but in the Epilogue, we learn she’s has been in the cave the whole time! And she intends to wake the third sleeper. Things are going to get crazy in the final novel, and I can’t wait.

*If you would like to purchase a copy of Blue Lily, Lily Blue you can do so through bookshop. Bookshop connects readers with all their favorite books via independent bookstores across the U.S.

If you would like to purchase the previous novels in the series check them out here.

Until next time I’ll be living in libros,

Follow me around the web at the links below.

Favorite book you read so far this year?
"Pablo Neruda’s my first name.”
I read 8 books in May and a lot of them were amazing!
QOTD: Heros or Villians?
Currently reading Dragonblood Ring
I only three books in April so for my recap I made a mini presentation.