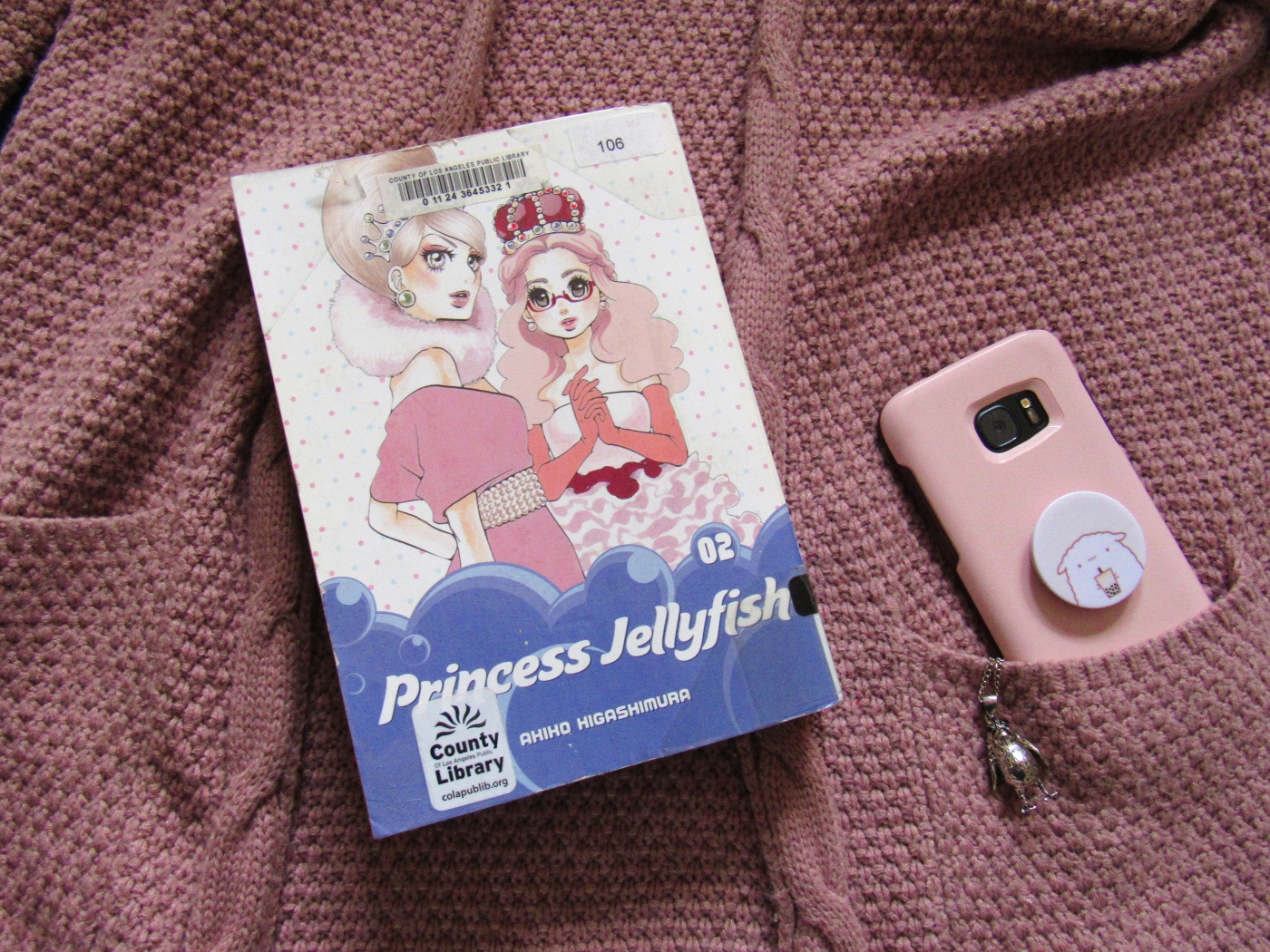 Ever since I finished the first volume of Princess Jellyfish, I have been hungry for more of this story. If you haven’t read my review of volume one, check it out here.

Volume two begins with Kuranosuke attempting to convince the Amars to sell part of their collections because it is the most valuable thing they own. The Amars are super reluctant to give up their collectibles, so Kuranosuke and Tsukimi go to Mejiro, the resident BL writer who makes a good income through her serializations, she agrees to cover the down payment of Amamizukan if the Amars can cover the rest. Kuranosuke then comes up with a brilliant idea to sell some of the forgotten junk in the Amamizukan attic along with anything else the Amars are willing to donate at a flea market. They hit a jackpot when Tsukimi sells her handmade jellyfish plush for 500 yen, 5 dollars USD, Kuro calls up the rest of the Amars, and they get to work making more jellyfish plushies. Although the amount they make from the jellyfish isn’t much, it’s a start to save their building.

Kuro’s crush on Tsukimi intensifies when he catches her playing dress-up with the leftover fabric. Tsukimi recalls her mother promising her as a child that she would make her a beautiful wedding dress inspired by the Jellyfish they saw at the aquarium, but her mother passes before that could ever happen. Although Tsukimi is embarrassed at having been caught, Kuro makes a promise to her to help her make a jellyfish dress.

Meanwhile, Inari—the real estate agent who roofied Shu and lied about having sex with him—blackmails him in order to secure a meeting with Shu’s father, an important politician. Mr. Koibuchi is happy that Shu finally has a girlfriend and has gotten over his trauma of watching his father feel up another woman, he is determined to keep his son’s relationship going. However, Kuranosuke isn’t buying this BS and calls out Inari for lying about sleeping with Shu, yet no one listens to him. Shu spends the rest of this manga attempting to get rid of Inari.

Kuranosuke tries to get her mind off of it by beginning the process of creating the jellyfish dress. Tsukimi is so focused on the process of making the dress look more and more realistic that she rips apart a pearl necklance that Kuro’s mother gave him before she left. Kuro faints but ultimately forgives Tsukimi because he clearly loves her.

Chieko, the daughter of the building manager, and Yiyi, the tenant with the obsession with old men, help Kuranosuke and Tsukimi make the dress and stay for tea with Mr. Koibuchi. Mr. Koibuchi lets it slip that Kuro is his son and very much a boy which makes Chieko very angry. Koransuke takes Chieko and Yiyi out to have some Peking Duck and tells them that he is really girl but his father raised him as a son as some weird political upbringing. The Amars accept this answer and Kuro is relieved that he won’t be banned from hanging out with Tsukimi ever again.

This volume ends with Kuranosuke lying to himself that he is in love with Tsukimi. He clearly is. Meanwhile, Tsukimi is trying to forget about Shu.

My favorite moment of this manga is the scene in which Kuranosuke catches Tsukimi pretending to be a bride because he sees her with hearts in his eyes. Meanwhile Tsukimi is mortified that he caught her in some dusty rugs and her crusty sweats. Name a better couple!

Although, Shu isn’t my favorite person I do hope he figures out how to drop Inari. Not only is she messed up for drugging him and blackmailing him, but she is annoying. Mr. Koibuchi, hires a family friend to do a background check on Inari so he isn’t entirely complicint in this mess, but after Shu catches on to the PI we don’t hear much about the investigation after that. I will be eagerly awaiting to see where their storyline goes not because I think they’d be cute together but because I want to see Shu reaction when he finally learns the truth.

The Princess Jellyfish manga has a total of nine volumes, which is doable, in my opinion. I hope to read more manga soon, but longer serializations scare me lol. Since my county library has all nine volumes, I will continue to update my blog with my thoughts on the series as I read. I’m aiming for ever Friday, but don’t hate me if I forget to update.

That’s all for now and until next time continue living in libros,